Welcome to our Second Annual Lenten Mission. The theme this year is Active Hope. Active Hope ignites the hope in those around us so they too may ‘pick up their mat’ and walk, it shares bread and fish with a hungry multitude, and it lifts children out of a cycle of poverty. This Lent, join us in the journey from hunger to fulfillment, as we deepen our relationship with Christ and share insights into Chalice's mission of Hope.
Register Now 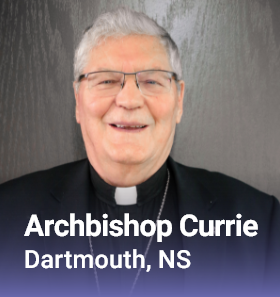 Archbishop Martin W Currie was born in Sheet Harbour, Nova Scotia, on December 11, 1943. He earned his Bachelor of Arts in 1964 from St. Francis Xavier University, and entered the Halifax Seminary that same year. He was ordained to the priesthood in 1968. Until 1999, he served the Archdiocese of Halifax as pastor of numerous parishes, and as chaplain to the Royal Canadian Mounted Police and the St. Vincent de Paul Society. He was also director of the Archdiocesan Propagation of the Faith, and on the Board of Nova Scotia Drug Dependency, Saint Mary’s University, and St. Vincent’s Guest House. He also served in the archdiocese as Administrator and Vicar General, as well as on an Archdiocesan mission to Chiclayo, Peru. He was appointed Bishop of Grand Falls, Newfoundland and Labrador in 2001, and the 7th Archbishop of St John’s, Newfoundland and Labrador on Oct 18, 2007, officially beginning his role November 30th, 2007. After 50 years of service, and at the age of 75, Archbishop Emeritus Currie retired back home to Nova Scotia. 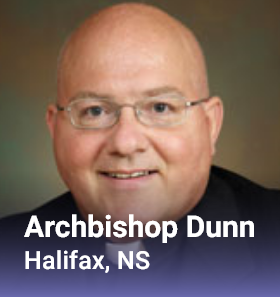 Archbishop Dunn was born in St. John’s, Newfoundland and Labrador in 1955, and was ordained to the priesthood on August 28, 1980. He was assigned to several parishes in the Diocese of Grand Falls, until 1988, when he enrolled at Saint Paul University in Ottawa and completed his doctoral studies in 1991. He also worked as vice-chancellor and later chancellor for the Diocese of Grand Falls, while also involved in teaching theology and pastoral ministry at the Atlantic School of Theology. In 2002, he joined the faculty at St. Peter’s Seminary in London, Ontario, and from 2005 until 2008, served as Dean of Studies. He was ordained as a bishop in Grand Falls-Windsor, Newfoundland and Labrador and served as Auxiliary Bishop of Sault Ste-Marie, Ontario until January 2010.  He was installed as the Bishop of Antigonish on January 25, 2010.  On April 13, 2019, Pope Francis appointed Most Rev. Brian Dunn as the Coadjutor Archbishop of the Archdiocese of Halifax-Yarmouth while also serving as the Apostolic Administrator for the Diocese of Antigonish until its new bishop was installed on February 3, 2020. Archbishop Dunn became the archbishop of the Archdiocese of Halifax-Yarmouth upon the retirement of Archbishop Mancini on November 27, 2020. 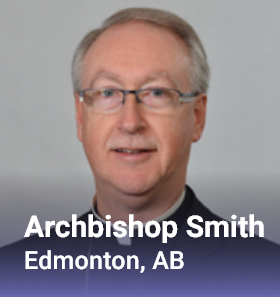 Archbishop Richard Smith was born in Halifax, Nova Scotia on April 28, 1959. He studied at Saint Mary’s University and the Atlantic School of Theology, both in Halifax, and was ordained to the priesthood on May 23, 1987. He pursued further studies in Theology at the Pontifical Gregorian Institute in Rome and obtained a Licentiate in 1997 and a Doctorate in 1998. After many fruitful years of ministry in Halifax, he was appointed Bishop of Pembroke on April 27, 2002, and ordained to the episcopate on June 18, 2002. Pope Benedict XVI, on March 22, 2007, appointed him to the Metropolitan See of Edmonton. Archbishop Richard Smith was formally installed as eighth Archbishop of Edmonton on May 1, 2007, the feast of St. Joseph the Worker. 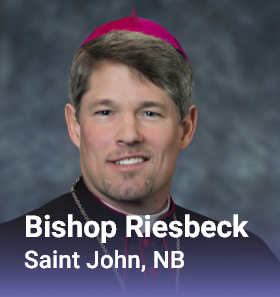 Bishop Riesbeck was born in Montreal on February 7, 1970.  He attended the University of Ottawa, where he obtained a Bachelor of Social Sciences in Political Science, followed by a Baccalaureate in Sacred Theology from Saint Paul University of Ottawa and a Master of Divinity from St. Augustine’s Seminary in Scarborough.  He was ordained to the priesthood in Ottawa with the Companions of the Cross on October 12, 1996. After serving in pastoral ministry in the Archdioceses of Kingston, Ottawa and Galveston-Houston from 1996 to 2008, he completed additional studies in Canon Law at Saint Paul University in Ottawa, in December 2010. He served various roles in the Archdiocese of Ottawa and the Companions until 2014, when an announcement was made by Pope Francis in January of 2014 that he was to be made Auxiliary Bishop of Ottawa. Bishop Riesbeck was ordained to the episcopate on March 19.  He has held the offices of Vicar General, Vicar for the National Language Parishes, Communities and Faithful, Moderator of the Curia, and Coordinator of English Pastoral Services. Bishop Riesbeck was named Bishop of the Diocese of Saint John on October 15, 2019, and installed on December 9, 2019. He is the thirteenth bishop of the Diocese. 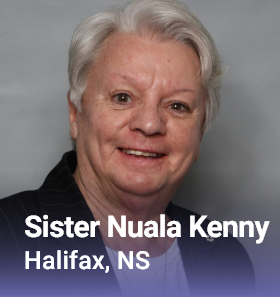 Sister Nuala Patricia Kenny was born in New York, and entered the Sisters of Charity of Halifax in 1962. She received her Doctor of Medicine from Dalhousie University in 1972. In 1975, she became a fellow of the Royal College of Physician and Surgeons of Canada in Pediatrics, and in 1976, was certified by the American Board of Pediatrics. She had a distinguished career in pediatrics at Dalhousie, the Hospital for Sick Children, the University of Toronto, and Queen’s University in Kingston, Ontario. In 1993, she held a fellowship at the Kennedy Institute of Ethics at Georgetown University under the mentorship of Dr. Edmund Pellegrino. In 1995, she founded the department of bioethics at Dalhousie University.   From February to November 1999, Dr. Kenny was seconded as Deputy Minister of Health for the Province of Nova Scotia. From 2009-2014 she served as Ethics and Health Policy Advisor to the Catholic Health Alliance of Canada. Among other awards, she has received seven honourary doctorates for her work, and was appointed an Officer of the Order of Canada for her contributions to children’s health and medical education. Author of more than 180 papers and five books, Dr. Kenny is nationally recognized as an educator and physician ethicist.

Love in the Kitchen